A Highly Successful Amazon Launch with a Botched Landing 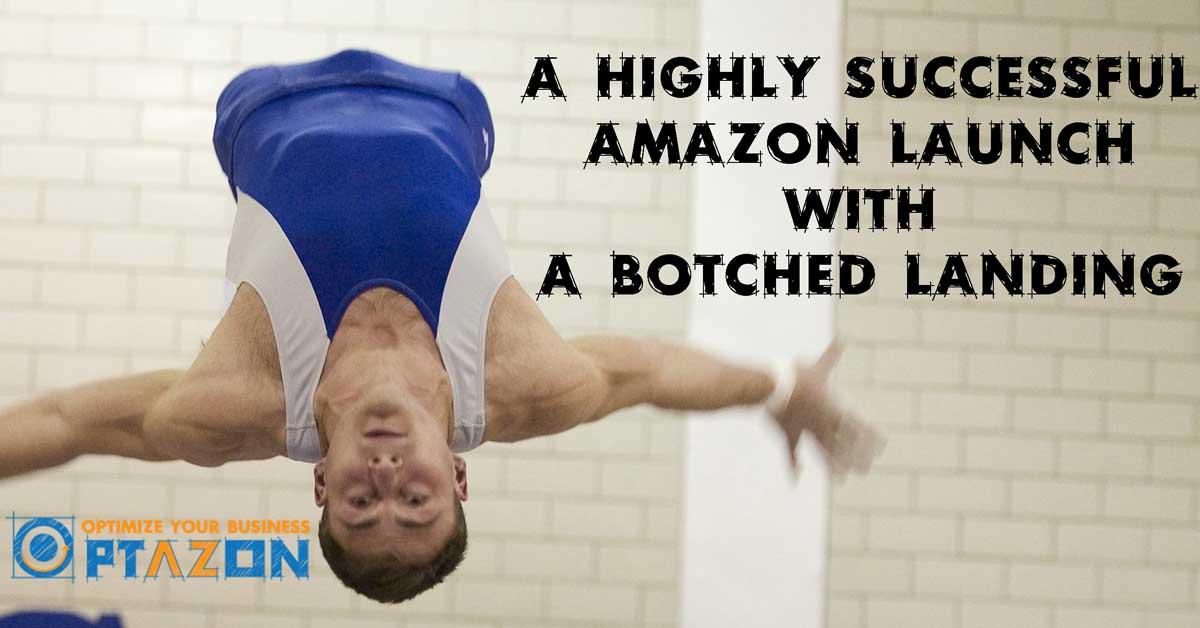 About a month ago I was sitting at my desk, and like I do every few days, I checked to see if I had any new competitors running an amazon launch.  This time, I did.  Well, that’s no fun.

I immediately ordered my competitors product so I could check it out, and started watching what was happening.  The first couple of days I noticed their BSR immediately shot from nothing, to 1,000 in the category.  Their maximum order quantity was limited to 1, and they were obviously running an effective amazon launch plan.

Over the next week, they jumped up to #2 in the highest competition search term with 200,000 searches a month. I calculated they were giving away 20-30 units a day.  After the third day, I stopped worrying about them, because I knew they were going to fail.  I kept watching though, because who stops watching a train wreck?

They had an amazing amazon launch plan, but they were destined for failure.

This isn’t a term I hear so much anymore, but back in 2014 when I started selling, the conclusion of a successful launch was called “The landing”

Think about a gymnast… They run, jump on a spring board, push off the vault, do a couple flips and turns mid air, and then they have to “Stick the Landing.” If they falter on the landing it ruins their score, even if everything before that was perfect.

As a smart seller, you don’t want your product to have to be constantly in “launch mode.” You want to launch your product, build a foundation of reviews and sales velocity, and then watch the organic sales take over.

Your ultimate goal isn’t just to get to the top, It’s to stay there. You want to stick your landing.

Their Amazon Launch is Destined to Failure

Earlier I mentioned I bought my customer’s product.  As soon as I opened the box, I stopped worrying about this competitor.

Now before you go down to the comments and let me have it, let me just state that I source a lot of my goods from China as well.  In fact, the product that I sell looks exactly the same as this new competitor’s product.  In fact, I recognized the packaging it came in and I know what factory they bought it from.

That’s because I’ve sampled almost every variation of my product out there.  I know my market.

Their product was 60% lighter than mine and made with a material that is easily breakable.  The weight of this product is important to it’s ability to function, and lighter isn’t better.  Sort of like a paper weight.   The edges were misaligned and uneven, and the hinges and other mechanisms on the product didn’t operate smoothly.  Imagine trying to put on a cell phone cover that fits, but the buttons are just slightly off.

The Positive Reviews Were ROLLING In

After about a week, they were picking up 3-7 reviews a day, and that tapered off after about 2 and a half weeks. They were overwhelmingly positive.  They weren’t often verified. In fact, only about 40% were verified. The product is primarily used by men, and the reviews all said “I bought this for my husband and he loves it” or some variation of that.

They were, in essence, fake reviews.  The kind Amazon warned us about.  The only difference is they don’t have a disclosure that they’re fake reviewers.

The Real Reviews Are now trickling in…

Now it’s been about 45 days, and the real reviews are trickling in, along with the fake reviews that are still coming.  They’re up to about 70 reviews now, and they’ve just clawed their way back up to 4.5 Stars – I expect fully that as time passes, and the “real reviews” keep rolling in, that score will drop down to about 3.5 stars.  If they end up at 4 stars, I’ll be surprised.

Are They Going to be Successful?

It all depends on what they’re looking for.  This person came to market and gave away about 500 units of a product that cost them 85 cents each.  Now they’ve sold about 1300 of them for $13.  From a short term perspective, they’re a success. They definitely made short-term money.

From a long term perspective, they’ve got real problems.  They’ll still sell a few units at 3.5 or 4 stars, but it won’t be the success they think they have right now.  The only way they’ll really be successful is if they continually go back to “launch mode” artificially propping up their review score and sales velocity.  I suspect, knowing the financials of their product, that won’t last very long.

They’re already slowly moving down the rankings search rankings.  Their BSR is gradually increasing.  As their “real customer” reviews start to roll in that’ll get even worse.

They’re not “Sticking their Landing” – they’re stumbling, and may fall.

The Moral of the Story

The reason these folks are going to struggle isn’t the product they chose, it’s the manufacturer.  They chose the cheapest option, with the least quality.  You’ll be interested to know that while they’re paying about 85 cents a unit for the cheap trash product, the more expensive, higher quality product is about $1.95.  We’re not talking about a huge cost increase or a hit to margins to sell the nicer product.  The higher sale price would more than make up the difference.

Be careful when you’re sourcing.  Get multiple units.  Inspect them.  But most of all, know what to look for.  My bet is this seller saw that it looks exactly like products selling well on Amazon, and bought a bunch of them with no clue that just because it looks the same, it can really be fundamentally different.  If you’re selling a BBQ Grill Glove, but you don’t BBQ, Make sure it gets tested out and checked out by a BBQ Guru.  If you’re selling Yoga Mats, make sure you have it tested by someone who regularly does Yoga so you’ll have real feedback.  Just because it looks good, doesn’t mean it really is.

If you want a long-term business, make sure you’re selling a quality product.

How Much Money You Really Need To Get Started Selling on Amazon (Private Label)
November 25, 2017

Guide to Creating Promotions and Protecting Your Inventory
August 5, 2017

Go to Top
Stay Up to Date!
Join our Newsletter
We'll notify you when we post updates, new content
or special deals.